As you can clearly see, the S&P challenged the lower boundary of its short term uptrend on Friday and was unsuccessful.  In the process, it filled yet another of those four gap up opens.  Two down, two to go.  Those a big pluses.  The 100 DMA moving above the 200 DMA is another plus.  Of course, those negatives that I have been enumerating daily haven’t gone away.  The key in the short term is whether Friday’s S&P test of its short term uptrend can hold.

More wonky discussion on what drove the Market melt up. 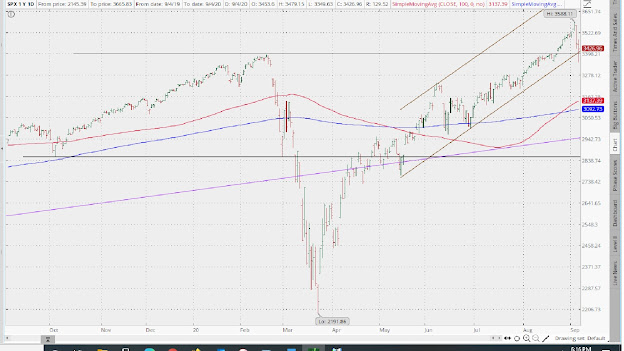 Long term, it is easy to observe that the long bond remains in uptrends across all time frames and above its 200 DMA---which would point to an upward bias in momentum,  Short term, things have gotten a bit confusing.  First, TLT experienced a sizable gap down open in early August that it has yet to fill---a positive.  Second, on Thursday, it broke out of a downtrend off its August, closed above its 100 DMA (now resistance) and failed to make a second lower high.  Also, pluses.  But Friday reversed all of that; and more important, it  appears that TLT has made a triple top (March/April/August).  That is really not good.  So, like the S&P, TLT is in a somewhat technically uncertain position.  It could be just part of a consolidation process or it could mark the beginning of a change in direction.  Stay tuned. 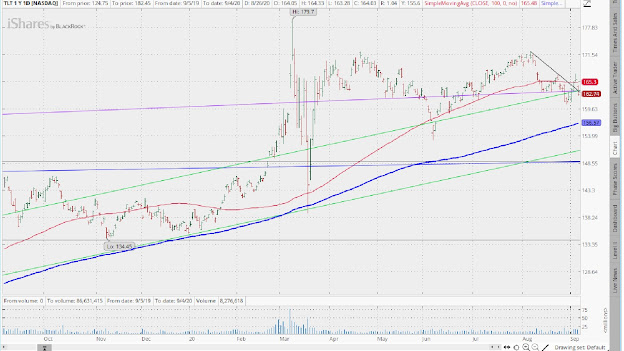 Gold’s long term chart remains solid.  But short term, similar to the S&P and TLT, it is experiencing some indigestion.  On the negative side (1) it has fallen out of the uptrend off its March/June lows, (2) the current decline started with a huge gap down open that was almost immediately filled, (3) GLD subsequently broke out of a pennant formation to upside and then immediately plunged lower and (4) in the process made two lower highs.  All this negative activity argues that some sort of top has been made.  On the other hand, it has taken place above a minor support level, it established in August.   I am going to wait until/if that level is successfully challenged before making a negative call of gold 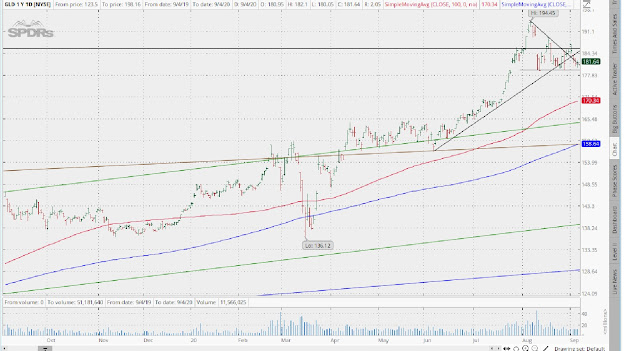 There is no directional confusion with the dollar.  It is down and, at present, without the slightest hint otherwise. 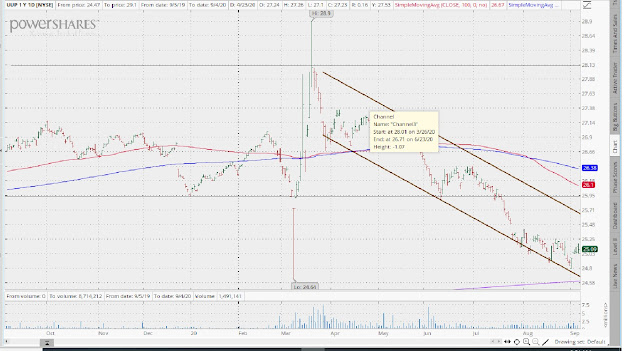 I have been repetitious in saying that the VIX hasn’t been acting normal over the last month, specifically, exhibiting a lot more uncertainty (not declining in unison) than the S&P.  It certainly didn’t make a new low (as the S&P did a new high).  It decisively broke out of the downtrend off its March high.  And now it is challenging both its 100 and 200 DMA’s---though as yet not successfully.  If that occurs, the implication is that stocks are going lower. 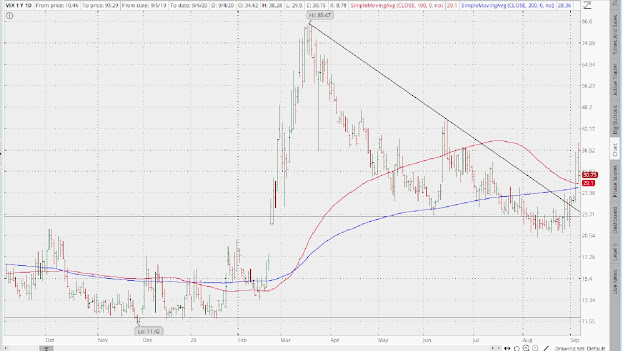 The data last week was slightly upbeat, but the primary indicators were mixed again.  So, while the recovery is progressing, it remains a stretch to characterize it as a ‘V’.  Still, conditions are improving and that is a plus.  Unfortunately, the international stats turned back negative; and I think that their sluggish performance will serve to restrain our own growth.

Intermediate term, the economic growth will be influenced by how quickly virus treatments and a vaccine are discovered as well as the permanent impact this disease/government reaction will have on the spending and work habits of the nation.

Whatever the shape of the recovery, I am not altering my belief that long term the economy will grow at a historically subpar secular rate due to the twin burdens of egregiously irresponsible fiscal and monetary policies---which, by the way, are becoming even more egregiously irresponsible as a result of measures being taken by the government and the Fed in dealing with the current crisis.

The August small business optimism index came in at 100.2 versus estimates of 97.

July German industrial production was up 1.2% versus consensus of up 4.7%; the July trade balance was E19.2 billion versus E22.0 billion.

The social and economic side effects of negative interest rates.

The first US reinfection case.

How to survive when you are the target of an angry mob.