The Morning Call--This is your future

I am back earlier than I thought (comments this week will still be abbreviated) because much has changed with the S&P (1402) over the past week.  It has (1) broken the newly re-set short term uptrend, (2) broken below its 50 day moving average again [wiggly red line] and (3) appears to have rejected the break above the former upper boundary of a short term trading range [1424].

A word about the latter---our technical discipline’s guidelines for the confirmation of a break of a short term trend is three days.  Clearly that is our guideline and it does not always work out that way.  The current situation has all the appearances of such a case, i.e. it takes the Market longer to reject a breakout than normal; however, I am going to give it another day or so but making that call. 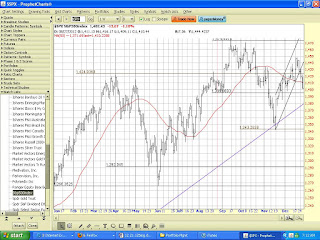 If in fact, the break to the upside has been rejected, then the former short term trading range is now operative (1343-1424) with interim support at 1395.  The lower boundary of S&P’s intermediate term uptrend now intersects at 1378.

Fundamental
As I am sure that you are aware, the reason for the current sell off is the inability of our elected representatives to come up with a compromise on the fiscal cliff.  This is not a surprise.  I have argued several times that the major imperative for a compromise would likely turn out to be a dramatic decline in stock prices.  That said, Friday’s close put the S&P right at its Year End Fair Value---which hardly qualifies the current sell off as ‘a dramatic decline in stock prices’.  Hence, if this thesis proves correct, we are in for more downside.

The good news is our Portfolios have plenty of cash.

The bad news is that in the midst of a contentious debate on how much to raise our taxes and not on the real fiscal issue (too much spending), Obama has just approved a pay raise for all government employees.  Take a good look at our future, ladies---a power elite that votes itself pay increases which it insists must be paid for by raising our taxes instead of imposing the slightest discipline on itself to manage this country’s budget responsibly.

Posted by Steven J Cook at 6:06 AM No comments:

Posted by Steven J Cook at 6:59 AM No comments:

Investment marketing is like watching a talented magician ply his trade. While the marketing geniuses keep everyone focused on the hottest new funds and stocks in an effort to chase strong returns, people forget about the single most important thing that matters to your retirement portfolio: volatility.

To repeat: Volatility is the critical variable in the retirement equation, not returns.

Forget Returns; It's About SWR and RSQ

If you're within 5 years of retirement, or are already in retirement, it's time to learn some new vocabulary:

Safe Withdrawal Rate (SWR): the percent of your retirement portfolio that you can safely withdraw each year for income, assuming the income is adjusted upward each year to account for inflation.

Forget about investment returns! From now on, the only question a retirement focused investor should ask their Investment Advisor when discussing their options is: How does this affect my RSQ and SWR?

The chart below shows how higher portfolio volatility results in lower SWRs, holding everything else constant:

1. All portfolios deliver 7% average returns.
2. Future inflation will be 2.5%.
3. Median remaining lifespan is 20 years (about right for a 65 year old woman).
4. We want to target an 85% Retirement Sustainability Quotient (RSQ).

This is actually quite intuitive when you think about it. Imagine a scenario where two retired persons, Steady Eddy and Risky Ricky by name, draw the same average annual income of $100,000 from their respective retirement portfolios. Both draw an income that is a percentage of the assets in their retirement portfolio at the end of the prior year.

Steady Eddy's portfolio is invested in a balanced strategy with a volatility of 9.5%, while Risky Ricky is entirely in stocks with a volatility of 16.5%. Both portfolios earn the same return (as they have done for the past 15, 20 and 25 years, though we will address this in greater detail below).

All other things equal, which person would you expect to be more conservative in the amount of income they spend each year? Obviously, if your income were subject to a large amount of variability each year then you would tend to be more conservative in your spending; perhaps you would squirrel away some income each year in case next year's income comes in on the low end of the range.

This relates directly to the impact of volatility on SWRs in the chart above. Volatility introduces uncertainty which is amplified by the fact that money is being extracted from the portfolio each and every year regardless of portfolio growth or losses.

How Much Gain Will Neutralize the Pain?

Of course, this effect can be moderated by increasing average portfolio returns, which would then increase average available income. The question becomes, how much extra return is required to justify higher levels of portfolio volatility?

The chart below defines this relationship quantitatively by illustrating the average return that a portfolio must deliver to neutralize an increase in portfolio volatility. In this case we hold the following assumptions constant:

1. Withdrawal rate is 5% of portfolio value, adjusted each year for inflation.
2. Inflation is 2.5%.
3. Retirement Sustainability Quotient target is 85%.
4. Median remaining lifespan is 20 years.

Again, the green bar represents the balanced stock/Treasury bond portfolio discussed above, and the red bar represents an all-stock portfolio. From the chart, you can see that the balanced portfolio needs to deliver 6.8% returns to achieve an 85% RSQ with a 5% withdrawal rate. The higher volatility stock portfolio, on the other hand, requires a 9.2% returns to achieve the same outcomes.

Focus on What You Can Control

There are many ways of improving the ratio of returns to volatility in a portfolio, mainly through thoughtful diversification across asset classes (our particular specialty). However, many investors are (perhaps rationally) concerned about diversifying into bonds now that the long-term yield is 3% or less, so let's see what can be done with a pure stock portfolio to take advantage of the growth potential of stocks while keeping volatility at an appropriate level to maximize RSQ and SWR. What if, instead of letting the volatility of the stock portfolio run wild, we set a target volatility for our portfolio and adjust our exposure to stocks up and down to keep the portfolio volatility within our comfort zone.

For the purposes of this example, we will assume that cash earns no interest, because it currently doesn't, and we want to focus on the effect of managing volatility alone.

More specifically, let's assume we measure the trailing 20-day volatility of the ETF (which tracks the performance of the U.S. S&P500 stock market index) at the end of each month, and adjust our portfolio at the end of any month where observed volatility is 10% above or below the volatility we measured at the end of the prior month.

For example, if we measured volatility last month at 15% annualized, and the volatility this month was greater than 16.5% or less than 13.5% (10% either way from the prior month), then we adjust our exposure to the ETF according to the most recently observed volatility using the technique described in the last paragraph. If this month's volatility does not exceed the threshold to rebalance, then we do not trade this month.

By using this simple technique to control volatility since the ETF started trading in 1993, we achieve 6.65% annualized returns with a realized average portfolio volatility of 10.73%. This compares with returns on the buy and hold ETF of 7.99% with a volatility of 20%. Note that our average exposure to the market over that period was just 69%, with the balance earning no returns. All returns include dividends.

The chart below shows the Sustainable Withdrawal Rate for the two portfolios: the volatility target and the buy and hold .

We can't control the returns that markets will deliver in the future, but we can easily control portfolio volatility by observing and adapting. Withdrawal rates from retirement portfolios are highly sensitive to this volatility, and we have demonstrated that by controlling volatility we can increase our safe withdrawal rates, and therefore boost retirement income, by almost 30% before tax.

Just imagine what's possible with a diversified portfolio of asset classes when you volatility-size them. But... that's for another article.

Posted by Steven J Cook at 8:12 AM No comments:

The December Philadelphia Fed manufacturing index came in at +8.1 versus estimates of -2.0 and November’s reading of -10.7.
http://advisorperspectives.com/dshort/updates/Philly-Fed-Business-Outlook.php

November durable goods orders were up 0.7% versus forecasts of up 0.5%; ex transportation, they were up 1.6% versus expectations of up 0.2%.

November personal income came in up 0.6% versus estimates of up 0.3%; personal spending rose 0.4%, in line.
The November Chicago National Activity Index increased to 0.1 versus October’s reading of -.64.

Posted by Steven J Cook at 6:09 AM No comments: