Linear Technology designs and manufacturers high end linear chips which monitor, amplify or transform continuous analog signals associated with real world phenomena (temperature, pressure, weight, position, light, sound and speed) and markets them in over 4,700 products.  The company has grown profits and dividends between 8-22% annually over the past 10 years earning in excess of a 20% return on equity.  LLTC  has experienced considerable earnings volatility of late; however, long term, it should be able to resume earnings growth because:

(1) it is broadening its product base to take advantage of infrastructure build out and the trend toward energy efficiency in industrial applications,

(1) the consumer segment of its business is weak due to low consumer confidence,

*most companies in LLTC’s industry don’t pay a dividend

Note:  LLTC stock made good progress off its March 2009 low, quickly surpassing the downtrend off its May 2008 high (red line) and the November 2008 trading high (green line).  Long term, the stock is in a trading range (straight blue line is the lower boundary).  Intermediate term, it is in an uptrend (purple lines).  Short term, it is in an uptrend (brown lines).  The wiggly blue line is on balance volume.  The Dividend Growth Portfolio owns an 85% position in LLTC.  The upper boundary of its Buy Value Range is $17; the lower boundary of its Sell Half Range is $80. 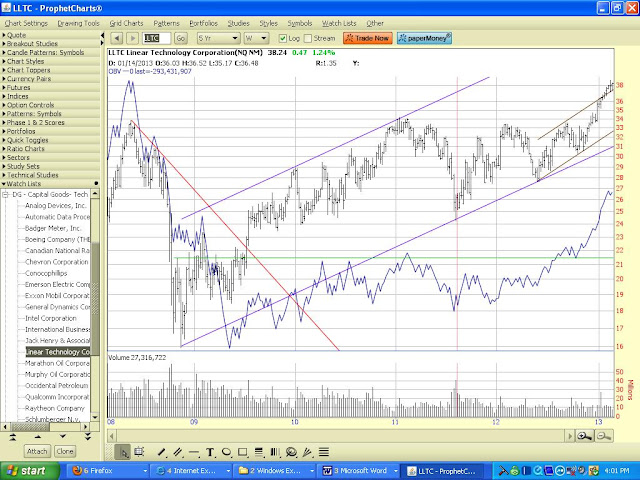 Morning Journal--Rationale for the nanny state

News on Stocks in Our Portfolios courtesy of Seeking Alpha

The ghost cities of Islam (medium):
http://www.steynonline.com/5430/ghost-cities
Posted by Steven J Cook at 6:11 AM No comments:

Volume declined, breadth continued to improve.  The VIX sold off, finishing within its short term and intermediate term downtrends.

GLD got hit after a couple of up days.  It remains within its short term downtrend; so the immediate direction is down and will remain so, until that downtrend is successfully challenged.

Bottom line: yesterday’s pin action notwithstanding, I think that the jury is still out as to whether the Market is in a topping process or positioning itself for an attack on the 14140/1576 levels.  Whatever occurs, our strategy hasn’t changed.  If prices continue to the upside, our Portfolios will raise more cash; if it rolls over, they will wait for a return to more reasonable values to put their current cash position to work.

Yesterday’s economic data was mixed: weekly mortgage and purchase applications were down, January durable goods orders also declined rather sizably but that was primary a function of poor aircraft orders---ex transportation, orders rose well above expectations.  Not great but it fits.

Bernanke did a second day on the Hill and just in case anybody had any doubts after Tuesday’s testimony that the Fed would be printing dollars as fast as it could buy the paper and ink, he re-emphasized the point.  As you know, there wasn’t much of a question in my mind that easing would go on for an extended time.  But I think he wanted to be sure that those who interpreted last week’s FOMC minutes as a foreboding of future Fed tightening were completely assured that it ain’t happenin’.   Obviously, investors were overjoyed to know the Fed intends to do all it can to support stock prices irrespective of the underlying valuation.

Great graphic providing a slightly different take on Bernanke’s record on inflation (short and a must read):
http://www.zerohedge.com/news/2013-02-27/bernankes-inflation-record

One day older and deeper in debt.  The sequestration effective date is tomorrow.  Obama continues to do what He does best---campaign, this time for tax hikes; but so far, the GOP is hanging tough.  As you know, I believe that all the whining over the coming cuts will be proven wrong; I believe that for there to be any chance of a return to fiscal responsibility, the sequester has to be implemented; indeed, I believe that there is a reasonable probability that the cuts in government spending could have a positive impact on economic growth.

Hence, I am encouraged; and to the extent that yesterday’s optimism reflects investors’ agreement with that position, then I understand their upbeat mood.  However, a move back from ever growing budget deficits will not be a day in the park.  It will take time; and the burdens of too much inefficient government spending will continue to impact growth for several years.  So even in the best case, corporate profits are not going to suddenly explode to the upside; and I suspect that the readjustment of the US economy will cause sufficient heartburn that multiples aren’t going to expand until it is truly clear that the ruling class has the will to complete the task.  In sum, with stocks already overvalued, I can’t make a case for higher prices under even the optimum scenario.
The tired rhetoric of sequestration (medium):
http://www.jewishworldreview.com/cols/will022313.php3

A failing Italian economy and political process couldn’t dampen investor enthusiasm.  However, I believe that the third Act of this play has not yet started---and this is a tragedy.  The news is not likely to improve.

The Germans are upset; but it may not matter (medium):
http://www.nakedcapitalism.com/2013/02/germans-and-eurocrats-throw-hissy-fits-over-italian-elections.html

A century of French and Italian economic decline (medium):
http://www.zerohedge.com/news/2013-02-27/centruy-french-and-italian-economic-decline

Unfortunately, at present, it is more than just the French and Italian economies that are declining (medium):
http://advisorperspectives.com/dshort/guest/Shedlock-130227-Nobody-Cant-See-Nothin.php

Bottom line:  I continue to be encouraged by the economic progress the is making.  In addition, I am encouraged that the sequestration process could prove to the first step back in the direction of fiscal responsibility.  While not a magic elixir that will smooth over years of profligate behavior, if it proves to the tipping point then that is enough for today.

That said, I believe that the Fed is digging itself into such a hole that it will never be able to right the sum total of its wrongs without causing either a more significant economic slowdown or a more destructive level of inflation than would otherwise occur with a less aggressively expansive monetary policy.

In addition, I am losing what little confidence I had in the eurocrats’ ability to fix a hangnail much less the growing sovereign/bank insolvency problem.  This is a stick of dynamite stuck up the global financial system’s ass.  A wrong move could be very painful for us all.

tax haven (medium):
http://www.businessweek.com/articles/2013-02-21/a-hedge-fund-tax-dodge-uses-bermuda-reinsurers#r=hpt-ls
Posted by Steven J Cook at 5:43 AM No comments:

The latest from Bill Gross

Posted by Steven J Cook at 3:00 PM No comments:

Email ThisBlogThis!Share to TwitterShare to FacebookShare to Pinterest
Labels: gold

News on Stocks in Our Portfolios courtesy of Seeking Alpha

The International Council of Shopping Centers reported weekly sales of major retailers up 0.1% versus the prior week and up 2.9% versus the comparable period a year ago; Redbook Research reported month to date retail chain store sales up 1.4% versus the similar time frame last month and up 1.7% on a year over year basis.

The December Case Shiller home price index rose 0.9%% versus expectations of an increase of 0.8%.
http://www.calculatedriskblog.com/2013/02/case-shiller-comp-20-house-prices.html

The February Conference Board’ index of consumer confidence came in at 69.6 versus estimates of 61.0
http://advisorperspectives.com/dshort/updates/Conference-Board-Consumer-Confidence-Index.php

A complete review of the housing market (medium):
http://scottgrannis.blogspot.com/2013/02/more-evidence-that-housing-has-bottomed.html

The February Richmond Fed’s manufacturing index was reported at +6 versus forecasts of -3.

Weekly mortgage applications fell 3.8% while purchase applications dropped 5.0%
January durable goods orders declined 5.2% versus expectations of a decrease of 4.0%; however, ex transportation, orders were up 1.9% versus estimates of up 0.2%.

Posted by Steven J Cook at 6:17 AM No comments:

The Morning Call--Bernanke doubles down

The February Dallas Fed’s manufacturing index fell from 12.9 to 6.2:
http://www.calculatedriskblog.com/2013/02/dallas-fed-regional-manufacturing.html

The January Chicago Fed’s national activity index came in at -.32 versus December’s reading of +.25.
http://www.calculatedriskblog.com/2013/02/chicago-fed-economic-growth-moderated.html

A look at corporate taxes paid (medium and also a must read):
http://advisorperspectives.com/dshort/guest/Chris-Turner-130225-Where-O-Where-Did-My-Two-Trillion-Go.php

Posted by Steven J Cook at 6:03 AM No comments:

The Morning Call---Brussels, we have a problem