After breaking its short term uptrend (and resetting to a trading range) in the prior week, the S&P made a new high last week resetting again to a short term uptrend.  Granted it was a tortured effort, but the end result is still the same.  However, given the index’s slow rate of ascent versus the trendline, it could easily repeat this process (short term uptrend to trading range back to short term uptrend) in the coming weeks. If this continues, it is going to be a long boring summer.  That said, it is better than a 400 point drop.  Longer term, my premise remains: ‘I can’t see an end to this uptrend as long as the money keeps flowing with abundance and in the absence of any major negative exogenous event.’ 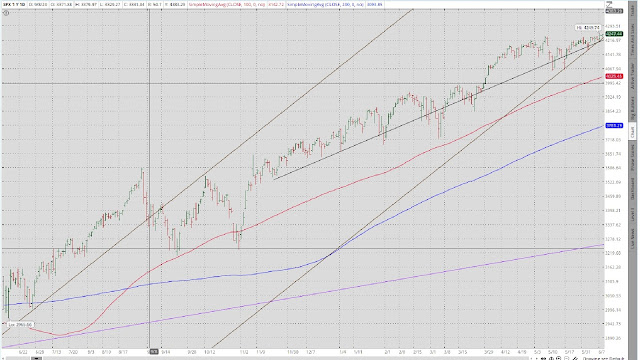 The big news of the week was the markets’ wide acceptance of inflation as transitory (at least for the moment).   The long bond’s pin action captures that  fact.  After a strong close on the previous Friday, TLT pushed ahead, negating a very short term trading range and reverting its 100 DMA from resistance to support.  This likely portends further gains to the upside and would be supportive of  (1) a lower concern about tapering and (2) higher stock prices. 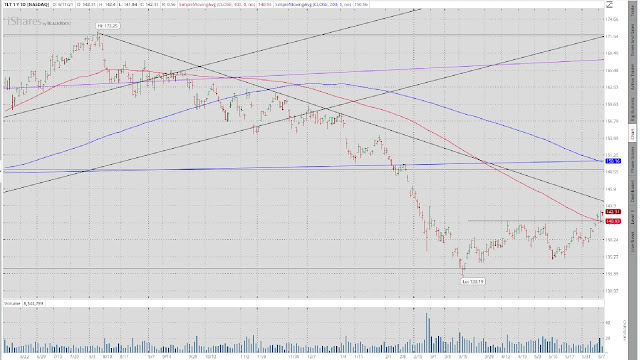 GLD responded to the ‘inflation is transitory’ theme as you might expect.  With bonds prices falling and the dollar picking up steam on the notion of disinflation, gold fell.  Nonetheless, it remains above both DMA’s and in uptrends across all timeframes including the move off its March lows.  However, if the ‘inflation is transitory’ remains the dominant Market narrative, I would expect further weakness in GLD. 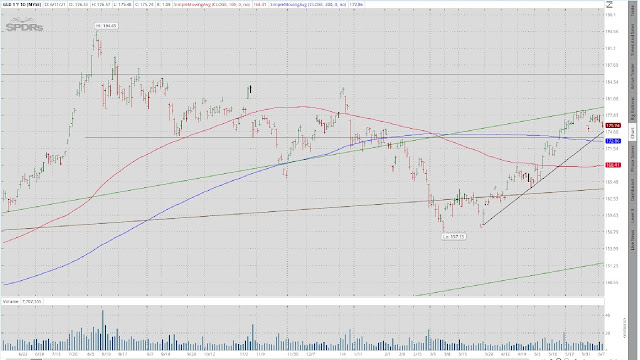 The dollar continued its bounce (its fourth) off the lower boundary of the short term trading range, making a minor new high in the process.  As noted above, its performance reflects the ‘inflation is transitory’ thesis.  As long as that dominates investor psychology, I would expect a further rise in the dollar. 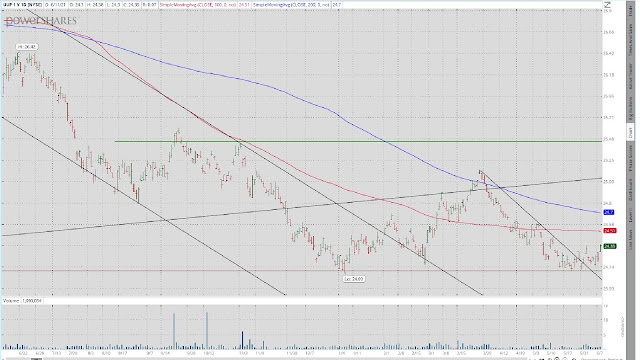 It was a slow week for economic releases with no primary indicators reported.  What there was, was balanced; though the big number of the week was May CPI which was higher than expected.  I would rate the week as a weak negative which would extend the string to poor data releases to six weeks.  Thus, the stats continue to confirm that the post Covid burst of economic activity is slowing and supports the notion that the Fed’s forecast that the current spike in inflation is transitory is right on.

That said, I would have expected that the aforementioned CPI number to cause some investor consternation; but I was wrong.  Both equity and bond markets rallied in the face of that datapoint, reaffirming their belief in the Fed’s ‘transitory’ thesis.  So far, so good.

Transitory or not, the loss of purchasing power is permanent.

My problem is that (1) the Fed has never had the right policies in place at critical inflection points in the economy, (2) nor has it ever successfully executed the transition from accommodative to normal monetary policy and (3) there are very few investors/economists around that experienced the ‘too much money chasing too few goods’ type inflation of the 1970’s.

Bottom line, as I discussed in Friday’s Morning Call, I think that the biggest risk to the ‘transitory’ scenario is stagflation---slow economic growth accompanied by rising inflation.

In this piece, Jeffrey Snider argues that Treasury bonds rates are declining because (1) the Fed is buying them from the banks, (2) which then have to buy them back [the reverse repo] to meet reserve requirements.  So, there is constant bid for bonds from the Fed and the banks irrespective of what is occurring in the economy.

Lance Roberts argues that rates are falling because they have always dropped near the end of a monetary easing phase.

Lance Roberts also contends that the biggest risk is a much weaker, disinflationary economy with the Fed either helpless to do anything or becoming too tight and making things worse.

Overseas, the data flow was again mixed.  So, we continue to get little help on the economic growth front from the rest of globe.  One item worth comment is that the ECB reiterated its support for its QE policy, saying that it may up its bond buying program.  Thus, providing even more ammo for the ‘too much money chasing too few goods’ argument.

Bottom line. ‘As you know my opinion is that following an initial snapback (which may already be over), the US economy will likely return to its former subpar secular growth rate, stymied by an irresponsible mix of fiscal/monetary policies.’---which are only getting more irresponsible---with the potential added risk of  ‘non-transitory’ inflation.

Posted by Steven J Cook at 6:30 AM No comments:

The Morning Call---Boy, was I wrong

Thursday in the charts.

Up to one half of pandemic unemployment payments may have been fraudulent.

The positives to the G7 minimum corporate tax proposal.

Biden cancels Keystone XL pipeline project.  This article from a happy environmentalist.  I hope she lives in Minnesota when the fuel runs out.

This author says supply constraints are a myth.

Lockdowns will prove to be one of the most catastrophic events in history.

Inflation bets run out of steam.  I was clearly wrong yesterday in my comments about a heightened debate about whether or not inflation will be ‘transitory’.  Judging by the pin action in both the stock and bond markets, it appears that, the reported numbers notwithstanding, investors have for the time being concluded that inflation is indeed transitory.

As you know, I pay a great deal of attention to the message from the bond market.  The question in my mind is, is the bond market discounting lower inflation or a slowing economy?    As you also know, I believe that the economy will return to a below average secular growth rate. So, if bond investors are betting on slower growth, then I am in agreement.  However, the talking heads are assuming that the markets’ message is that inflation will be transitory. What if growth slows but inflation still remains high due to ‘too much money chasing too few goods’.

My favorite optimist believes that could be the case.

I am not presenting this as a forecast; but I think it is the biggest risk.

What does this mean?  Well, short term at least, investors have bought the Fed’s Kool Aid.  Inflation is transitory; so, no need to begin worrying about tapering. ‘I can’t see an end to this uptrend as long as the money keeps flowing with abundance and in the absence of any major negative exogenous event.’

Posted by Steven J Cook at 6:07 AM No comments:

The Morning Call--The 'transitory' inflation debate about to intensify

Wednesday in the charts.

More on China’s reaction to that higher PPI number.

Dinosaur found in Australia was two stories high and the length of a basketball court.

Frozen worms brought back to life after 24,000 years.

Posted by Steven J Cook at 5:55 AM No comments:

Tuesday in the charts.

The dollar---down but not out.

The April German trade balance was E15.9 billion versus estimates of E16.3 billion.

America (and China) is driving the global economy.

This analysis is likely very reflective of what the Fed wants (thinks that it can do) to do with respect to the timing and execution of tapering.  The question is, will it be successful?  As a possible answer, I remind you that the Fed has never, ever got the transition to normalized monetary policy right.  Indeed, it has a history of being dead wrong at the most critical of times.

This as a counterpoint.

How big an impact would the global corporate minimum tax have on S&P earnings?

US and EU agree to lift tariffs.

What is not transitory.

The relative affordability of new homes continues to decline.

But a couple of hopeful signs that inflation may be peaking soon.

It is not a recovery because there was never a recession.

Getting the goalpost to stop moving.

A thought piece, not necessarily because I agree with all of it.

A sad commentary on the credibility of science.

More (enlightening) detail on yesterday’s story that the rich skated on paying taxes.

Posted by Steven J Cook at 6:12 AM No comments: