My assumption continues to be that equity prices’ bias is to the upside, as they are overcome two restraining factors---the resistance presented by both indices’ 100 and 200 DMA’s and the pin action in the VIX.

Yesterday’s datapoints were slightly weighed to the negative.  April durable goods orders and the May Kansas City Fed manufacturing index were better than anticipated while weekly jobless claims, April pending home sales and the second estimate of Q1 GDP growth were disappointing

Overseas, May EU business and consumer confidence came in above estimates while economic, industrial and services sentiment were below.  May German inflation was in line.

Will politicians admit their mistake?
https://www.aier.org/article/will-the-politicians-admit-their-lockdown-mistake/

Trump says that he will hold a news conference on China today.
https://www.zerohedge.com/markets/stocks-slammed-after-trump-confirms-china-news-conference

US/China feuded spells trouble for the US economy and stock market.
https://www.bloomberg.com/news/articles/2020-05-28/trump-vs-china-risks-are-mounting-for-markets-and-the-economy?srnd=premium&sref=loFkkPMQ

Bottom line:  as you can tell by the above headlines, the growing strains in the US/China relationship dominated investor attention yesterday.  As you know, I believe that a breakdown in trade (or worse) is a major risk to any improvement in US economic growth.  That could potentially translate into Market risk; though with all the liquidity being pumped into the financial market, I have doubts.
https://www.zerohedge.com/markets/last-time-albert-edwards-saw-nonsense-was-2008-how-it-ended

The May Kansas City Fed manufacturing index was reported at -25 versus consensus of -46.0.
https://www.advisorperspectives.com/dshort/updates/2020/05/28/kansas-city-fed-survey-continued-decline-but-improving-in-may

It matters how the money is spent.
https://www.adamsmith.org/blog/cant-we-all-be-keynesian-about-this

My assumption continues to be that equity prices’ bias is to the upside, though they are overcoming two restraining factors---the resistance presented by both indices’ 100 and 200 DMA’s and the pin action in the VIX.

GLD was up, TLT down and UUP unchanged.  All their charts remain strong, suggesting that their investors remain risk averse.
Wednesday in the charts.
https://www.zerohedge.com/markets/if-youre-buying-stocks-during-us-day-youre-doing-it-all-wrong

It was a slow day for data.  Weekly mortgage and purchase applications rose and month to date retail chain store sales fell less than in the prior week.
https://alhambrapartners.com/2020/05/26/getting-a-sense-of-the-economys-current-hole-and-how-the-governments-measures-to-fill-it-dont-add-up/

The Fed released its latest Beige Book, which told us what we already knew---the economy was sh*tty for the six weeks leading up to May 18th.
https://www.calculatedriskblog.com/2020/05/feds-beige-book-economic-activity.html

Update on US coronavirus data.
https://politicalcalculations.blogspot.com/2020/05/united-states-continues-trending.html#.Xs6uimhKg2w

Fewer things will change than we might expect (must read).
https://blogs.cfainstitute.org/investor/2020/05/18/forecasting-the-post-coronavirus-world/

On the other hand, ‘creative destruction’ could save the economy.
https://www.prospectmagazine.co.uk/economics-and-finance/schumpeters-virus-how-creative-destruction-could-save-the-coronavirus-economy#widget_user

Bottom line: the explosive growth in M2 discussed above plus the expansive fiscal policies announced by the EU Tuesday (see Tuesday’s Morning Call), Japan yesterday (see above) and McConnell comments (yesterday) that a third stimulus bill will likely be enacted means that the financial markets will continue to be flooded by excess liquidity.  That likely means that equities will continue to advance until acted upon by some outside force (China?).  Lie back and enjoy it.
https://thereformedbroker.com/2020/05/26/this-is-the-thing-the-bears-hate-most/

Let’s not forget the Fed.
https://www.nytimes.com/2020/05/27/business/stock-market-coronavirus.html

The value of the Fed ‘put’.
https://www.zerohedge.com/markets/how-fed-unleashed-schrodinger-equilibrium-between-economy-and-markets

Weekly jobless claims were up 2,123,000 versus expectations of up 2,100,000.
https://www.zerohedge.com/personal-finance/over-40-million-jobless-10-weeks-nobody-ever-imagined-it-would-get-bad-so-fast

April durable goods orders fell 17.2% versus consensus of down 19.0%, ex transportation, they were off 7.4% versus -14.0%.
https://www.zerohedge.com/economics/collapse-us-durables-goods-orders-accelerates-april

Posted by Steven J Cook at 6:30 AM No comments:

The Morning Call---Money's for nothing and the chicks are free

The Averages  (24995, 2991) exploded at the open but experienced a bit of heartburn near the close.  Still, they closed with a major gain.  This strong performance went a ways in correcting the Market’s confused technical state.  The Dow voided its developing double top formation and reset its very short term trend to up, joining the S&P.  The S&P pushed above its 100 DMA (now resistance; if it remains there through the close on Thursday, it will revert to support) and its 200 DMA but failed to hold above that level.  Nevertheless, those huge 5/18 gap opens remain unfilled and they will continue to act as a magnet that needs to be closed.

My assumption continues to be that equity prices’ bias is to the upside but that effort will be labored.  The resistance presented by both indices’ 100 and 200 DMA’s, the magnetic pull of the 5/18 gap up opens and the pin action in the VIX (which continues to be unable to push below its 5/13 low) support that notion.

TLT, GLD and UUP were down---not surprising on a big risk off day.  However, their charts remain strong, suggesting that their investors remain risk averse.
https://www.zerohedge.com/markets/gold-hammered-lower-heavy-volume-chinese-yuan-slammed

Tuesday in the charts.
https://www.zerohedge.com/markets/vaccine-vacillation-sparks-stock-surge-dollar-purge

Yesterday’s economic stats were weighed to the plus side.  The March Case Shiller home price index, April new home sales, the May Dallas Fed manufacturing index were better than anticipated while May consumer confidence and the April Chicago Fed national activity index were below expectations.
http://econbrowser.com/archives/2020/05/no-v-recovery-538-com-igm-covid-19-economic-outlook-survey-series

Overseas, the numbers were even more upbeat. The March Japanese leading economic indicators, its March All Industry index and June German consumer confidence were above forecast and final Q1 German GDP was in line.
The coronavirus

The leak from the Wuhan lab.
https://www.zerohedge.com/health/french-intelligence-warned-catastrophic-leak-wuhan-lab

Bottom line: what do you say about a Market that is unfazed by unknowns that include the magnitude and extent of an economic recovery, scale of changes that will almost surely occur in American’s social and spending patterns and heightening tensions with China?  You say that as long as investors are unconcerned about valuations, as long as ‘money’s for nothing’, stock prices’ bias will be up.  I cannot buy a stock whose valuation is almost solely determined by monetary policy.

The latest from John Mauldin.
https://www.advisorperspectives.com/commentaries/2020/05/22/rewinding-the-tape

Month to date retail chain store sales fell less than in the prior week.

The March Case Shiller home price index was up 1.1% versus expectations of +0.2%
https://www.advisorperspectives.com/dshort/updates/2020/05/26/s-p-case-shiller-home-price-index-march-update

May consumer confidence came in at 86.6 versus forecasts of 87.5.

The May Dallas Fed manufacturing index was -49.2 versus consensus of -57.0.
https://www.calculatedriskblog.com/2020/05/dallas-fed-contraction-continues-in.html

How US consumers are spending during coronavirus lockdown.
https://www.zerohedge.com/personal-finance/visualizing-how-us-consumers-are-spending-differently-during-covid-19

Posted by Steven J Cook at 6:26 AM No comments:

The S&P momentum remains to the upside, although it is struggling a bit to sustain it.  Working against it is the overhead resistance presented by its 100 and 200 DMA as well as the downward pull of its 5/18 big gap up open.
https://www.zerohedge.com/markets/bear-market-or-just-big-correction 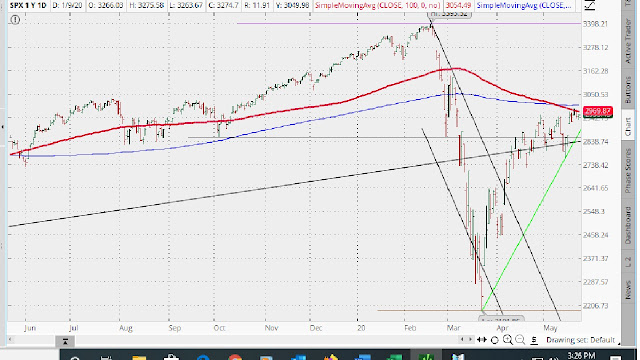 The long bond’s technical position is somewhat similar to the S&P (and GLD).  While visually it doesn’t look the same, still, its bias is to the upside but is being restrained by other technical factors---in this case, the upper boundaries of its very short term and intermediate term uptrends. 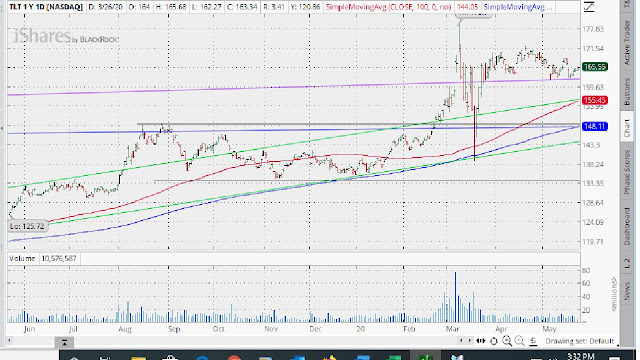 Gold’s chart not only looks like TLT’s chart but its technical picture is the same---it continues to push upward albeit at a slow pace which is being inhibited by the magnetic pull of the upper boundaries of its very short term and short term uptrends. The dollar’s chart is a weak version of TLT and GLD---momentum remains to the upside but it is anemic.  Indeed, it is being supported by its 100 and 200 DMA’s. 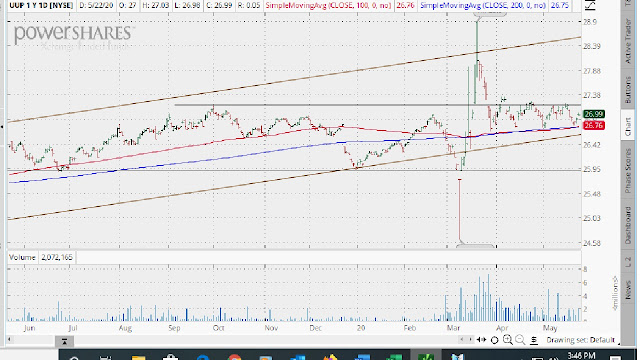 The VIX has not made exactly mirrored the S&P, i.e. it couldn’t sustain its very short term downtrend nor has made a new low.  That supports the notion of a labored advance in stock prices. 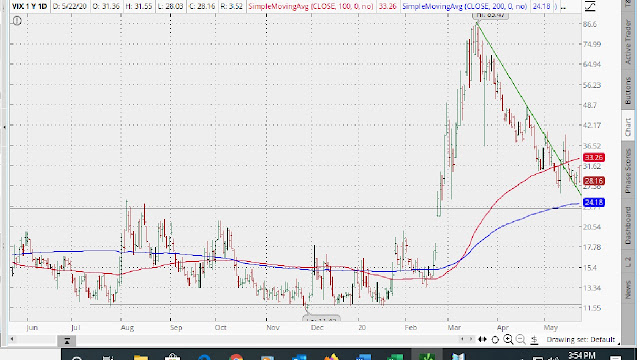 The April Chicago Fed national activity index came in at -16.7 versus estimates of -3.0

The March Japanese leading economic indicators were reported at 84.7 versus consensus of 83.8; the March All Industry index was -3.8 versus -4.8.

Posted by Steven J Cook at 6:01 AM No comments: