Having filled the June ‘island top’ gap, pushed through its June high and established a very short term uptrend, the S&P ended last week on its back foot.  However, stocks had gotten a bit overbought; so, I think that there is no reason to assume that this drop was anything out of the ordinary.  I continue to believe that the trend is up and that it is just a matter of time until S&P’s February high is challenged.
https://www.marketwatch.com/story/this-index-tracks-economic-uncertainty-and-its-pretty-clear-about-whats-in-store-for-stocks-through-election-day-2020-07-24 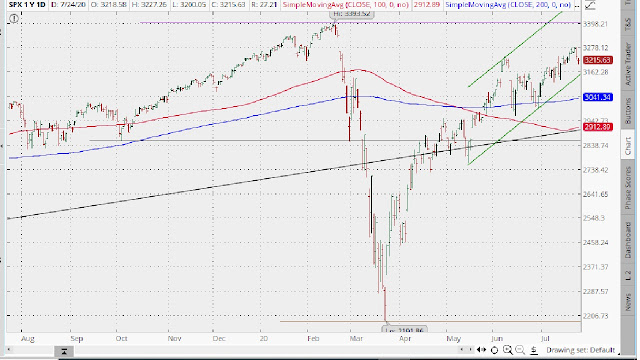 While the long bond’s chart does not show short term momentum as strong as either the S&P’s or GLD’s, long term, it is the only major index that I regularly refer to that is above the upper boundary of its long term uptrend.  Hence, it is pretty safe to say that bond price (interest rates) remain is a solid uptrend (downtrend). 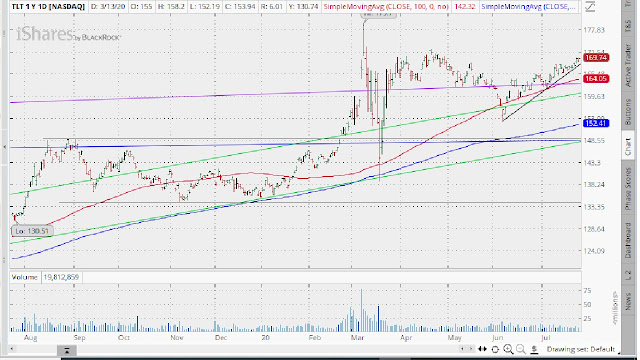 A short term chart doesn’t get much better than GLD’s.  It has strong upside momentum, is above both DMA’s and in uptrends across all timeframes except its long term---and there is no resistance between the current price level (178.70) and the upper boundary of its long term trading range (185.85).  So, it seems reasonable to assume that GLD will challenge that boundary at the very least.
https://www.zerohedge.com/markets/gold-soars-near-record-highs-usdollar-tumbles-six-month-lows 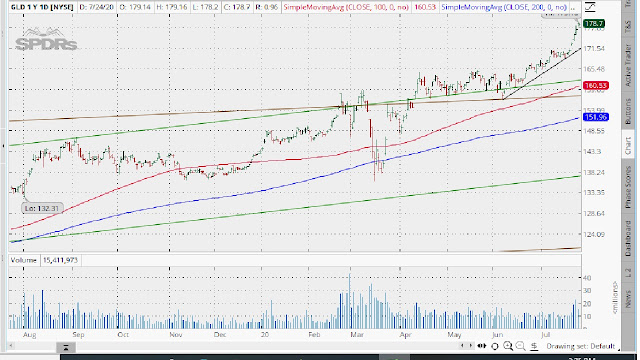 Then we have the dollar.  Last week, it reset its short term trend to down.  Coupled with declining interest rates and rising gold prices, that suggests a weakening economy---which makes higher stock prices the odd man out in this scenario.  But, of course, there is the Fed. 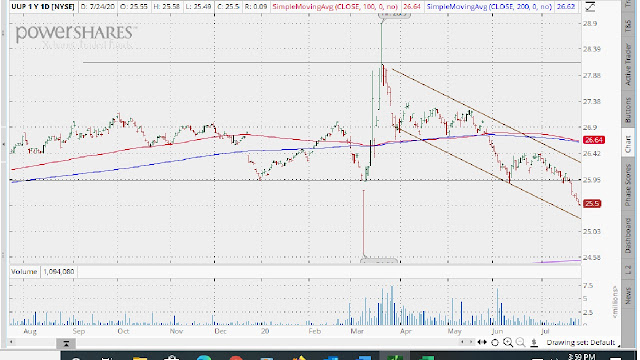 Friday’s pin action in the VIX was a bit of a surprise.  Normally, the VIX advances on a down Market day---which it tried to do early in the trading session but then failed.  However, it does support the notion that equity prices are headed higher.  And why not?  There is the Fed. 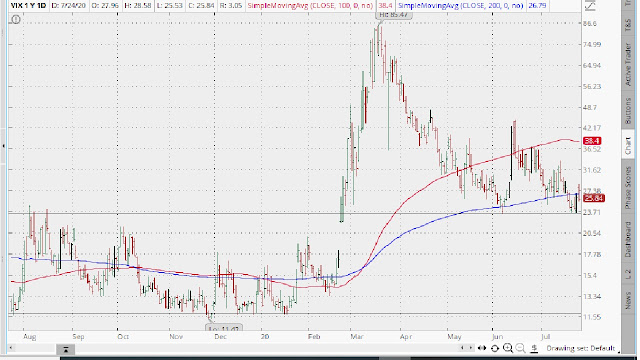 The Economy
Summary from last week.

The data (and primary indicators) last week were down..  The overseas stats were quite positive.

Short term,  the economic numbers keep yo yoing around leaving the magnitude and shape (V, U, W, etc.) of recovery in question---made more so as lockdowns are being re-imposed nationwide.
https://www.bloomberg.com/news/articles/2020-07-23/u-s-economy-s-recovery-is-stalling-and-it-could-get-even-worse?srnd=premium&sref=loFkkPMQ

Longer term, the economic growth will be influenced by how quickly virus treatments and a vaccine are discovered as well as the permanent impact this disease/government reaction will have on the spending and work habits of the nation.

Whatever the shape of the recovery, I am not altering my belief that long term economy will grow at a historically subpar secular rate due to the twin burdens of egregiously irresponsible fiscal and monetary policies---which, by the way, are becoming even more egregiously irresponsible as a result of measures being taken by the government and the Fed in dealing with the current crisis.

Gunshot to the head attributed of the coronavirus.
https://www.zerohedge.com/political/gunshot-head-parkinsons-disease-deaths-palm-beach-incorrectly-attributed-covid-19

The latest from John Mauldin.
https://www.zerohedge.com/markets/valuation-inflation

Getting to know wasps.
https://www.nytimes.com/article/paper-wasps-yellowjackets.html

The French Revolution and the Woke Revolution (must read):
https://www.realclearmarkets.com/articles/2020/07/24/socialism_is_a_consequence_of_an_economy_that_hasnt_grown_for_12_years_499945.html