I am travelling tomorrow and Tuesday, so here is Monday Morning Chartology

Last week, the S&P reset its short term trend from a trading range to up.  Indeed, this chart is back into the ‘what can I say?’ territory.  The index is above both DMA’s and in uptrends across all timeframes.    My Market assumption remains: ‘while valuations continue to reach historical extremes, I can’t see an end to this uptrend as long as the money keeps flowing with abundance and in the absence of any major negative exogenous event.’ 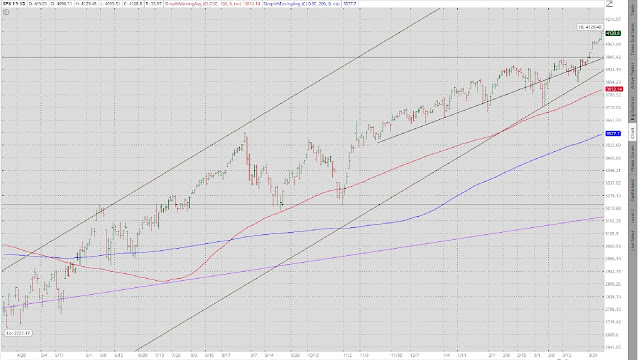 The long bond struggled higher on the week.  While some progress was made, it could not make a higher high.  That leaves it in a very short term mini pennant formation.  For the moment, it appears a bottom has been made.  But the question is, how much upside momentum does TLT have?  Stay tuned. 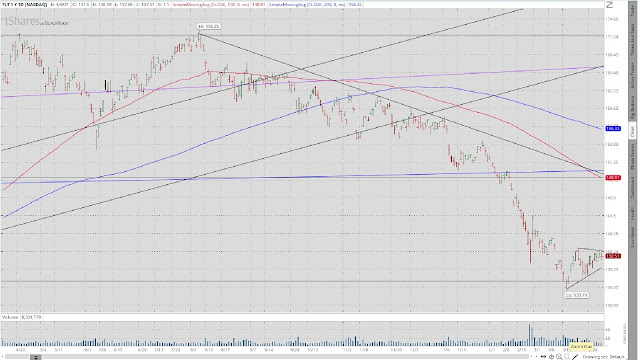 GLD continued to gather strength last week.  While it remains in a downtrend dating back to last October, it did manage to negate a really short term downtrend.  Remember that gold got very overextended to the upside late last year.  So, the current retreat is normal. It needs to show more follow through to the upside---like voiding that downtrend dating from October 2020---before I get too optimistic about a return to former highs.  In short, follow through. 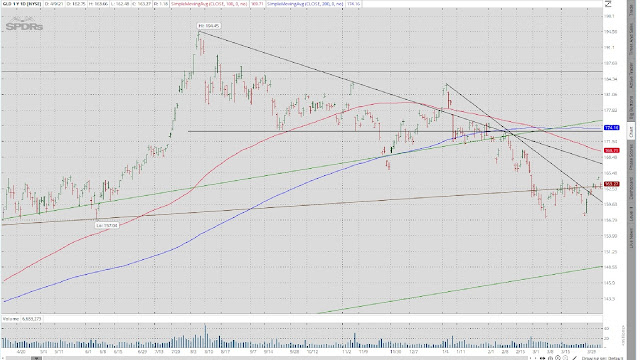 The dollar had a tough week with its 200 DMA reverting from support to resistance.  The good news is that it remains in a trend of higher highs and higher lows.  As you know, I believe that the recent strength in UUP is the result of the US economy performing better that the rest of the globes.  This week’s data and my restrained view of the US’s future growth prospects notwithstanding, I think that this will continue to be the case (mainly because the rest of the world’s central bankers and political classes have done an even worse job of guiding their economies than our own.) 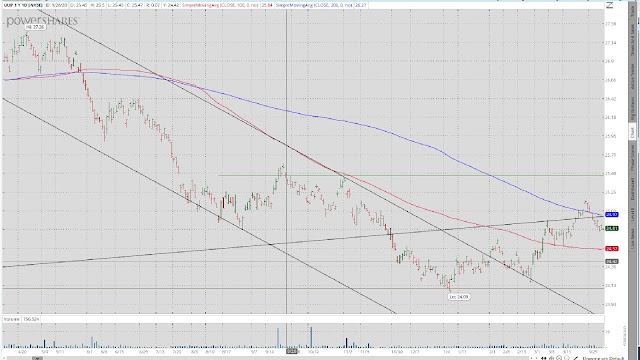 I thought that I would throw in a picture of the VIX this week.  As you can see, it has been whacked the last couple of weeks, pushing towards historic lows.  That is a signal that fear is being drained from the Market and ultimately leads to overconfidence and then correction. 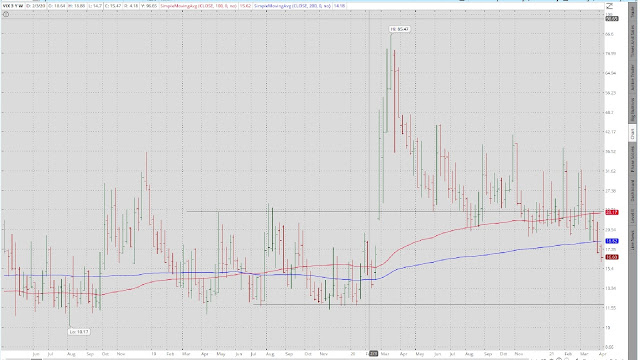 US statistical releases, including the primary indicators were negative last week. That is a bit of a surprise; though, again, we are still working our way through February results.  So, one unexpectedly poor week is no reason to question the ongoing recovery.

The one number that does bear mentioning is the very hot March PPI report.  This likely indicates that the US economy is entering the period in which everyone agrees will witness rising inflationary pressures.  Where there is disagreement is whether or not the increases will be transitory.  As you know, Chair Powell assures us that that will be.  While many other experts disagree.  As you also know, I am in the latter camp.  Whoever is right is less important than the fact that we appear to be entering the period of rising inflation and we will know soon enough if it is a temporary phenomenon or a more permanent one.

One other comment.  We now know the rough terms of Biden’s Plan, phase one.  Last week, I held out the hope that if his proposal was composed of productivity enhancing infrastructure projects and was paid for with taxes (or reduced spending in other government programs; as if), then, in my opinion, it would be a plus for the US economy.

Well, no such luck.  Unfortunately, only a fraction of the spending goes to true infrastructure improvement.  The rest is basically social welfare which is anything but productivity enhancing.  The bottom line is that this plan in its current form would raise inflationary pressures and inhibit economic growth (servicing a massive increase in debt usurps capital investment).  In short, this only makes me more convinced that rising inflation and slower secular growth is the correct forecast.

Overseas, the data flow was again quite positive, supporting the notion that the rest of the world’s economies are also recuperating.

Bottom line. ‘As I have tried to highlight, the issue isn’t whether or not the US (world) economy is rebounding, the issue is its magnitude and duration.  As you know my opinion is that following an initial snapback, the US economy will likely return to its former subpar secular growth rate, stymied by irresponsible mix of fiscal/monetary policies.’

Remains of an alien planet lurk deep within earth’s mantle.

Posted by Steven J Cook at 9:25 AM No comments:

Thursday in the charts.

As talk about inflation rises so does the interest in gold.

VIX near a low.

Getting GDP back to pre-Covid levels.

How trillions in stimulus created a job crisis.

Highlights from Powell’s speech to IMF panel  (nothing new).

Things are worse in Europe.

Too smart for his own good (a bit too moralistic, but you will get the point).

The macro risks to the stock market are rising.

A tiny particles wobble could upend the laws of physics.

Posted by Steven J Cook at 6:08 AM No comments:

The Morning Call---All systems Go at the Fed

Wednesday in the charts.

Is oil trying to tell us something?

The latest nowcasts anticipate a strong US Q1.

Yesterday, the FOMC released the minutes of its latest meeting---which didn’t deviate from the current narrative, i.e., the Fed is cautiously optimistic about the economy but not so much that it is considering a change in interest rates or its bond buying program.

The ECB also released the minutes of its latest General Council meeting.  Like the Fed, nothing has changed---more low rates and QE.

Markets beginning to price in rate hike next year.

This is a good pro/con discussion.

The market’s expectation for inflation and real rates over the next five years.

Where the virus was the deadliest for seniors.

The tyranny of ‘enlightened’ experts.

The stock market as a discounting mechanism.

Another family office appears to be blowing up.

This is what is happening at the border.

Posted by Steven J Cook at 6:09 AM No comments:

Tuesday in the charts.

The February Japanese leading economic indicators came in at 99.7 versus 98.5 in January.

UBS predicts 80,000 retail stores will close in next five years.

Beijing orders banks to curtail loan growth for rest of 2021.

When and where to exit.

A trillion here, a trillion there.

Can the US borrow its way to higher economic growth?

Why the silence in the face of the Covid tyranny?

The virus has made where you live even more important.

March dividends by the numbers.

The UK and EU pledge to back Ukraine amidst Russian military buildup.

Posted by Steven J Cook at 6:14 AM No comments: