The Market
Technical
The good news is that absolutely nothing has changed in the S&P chart in the last four weeks.  The index continues to smoke to the upside, remaining above the MA’s and in uptrends across all timeframes.  There is little technical evidence that this will change in the near future.
http://traderfeed.blogspot.com/2020/01/is-very-strong-market-due-for-correction.html 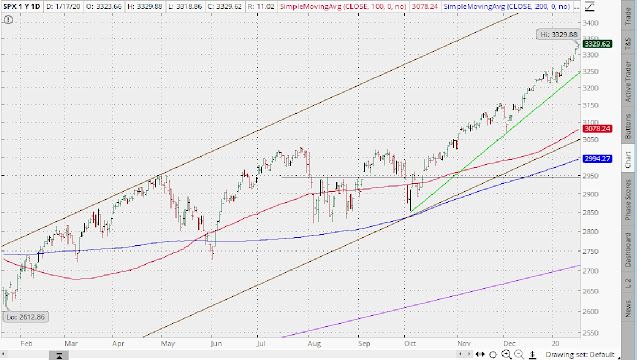 The long bond hasn’t altered its trading pattern.  After falling back from the upper boundary of its intermediate term uptrend, it went on to revert its 100 DMA from support to resistance and reset its very short uptrend to a trading range. 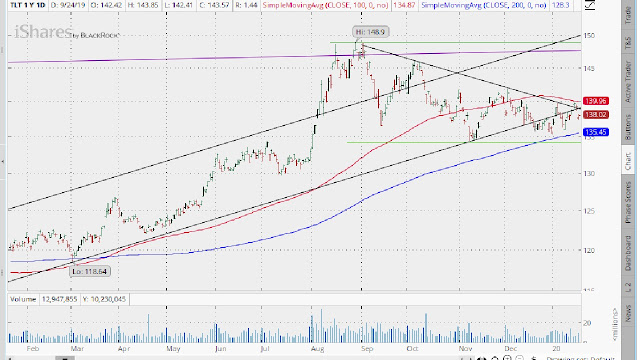 The whackage in the dollar continued.  Both MA’s have reverted to resistance and its short term trend has reset to down. 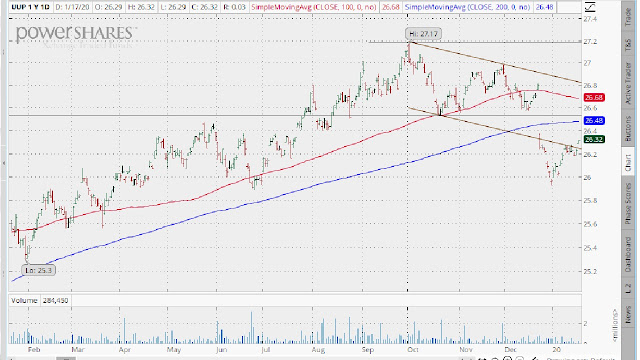 Gold made a nice recovery over the last month, now trading above both MA’s and in short term and very short term uptrends.
http://www.crossingwallstreet.com/archives/2020/01/the-gold-bubble-40-years-on.html 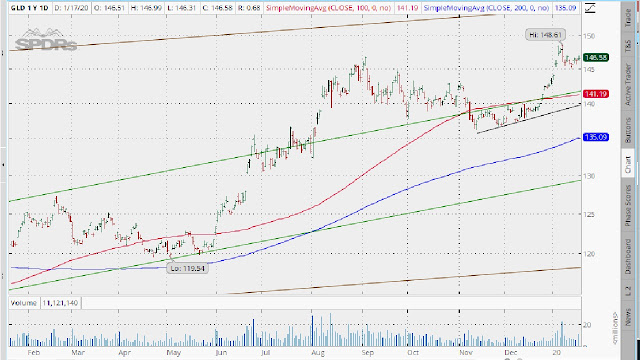 As you might expect in a strong up Market, the VIX hovers around all-time lows and gives no sign that sentiment could be turning negative. 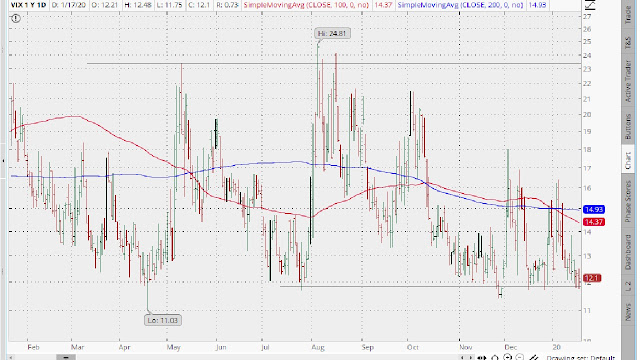 Bottom line: the S&P, TLT and VIX are all suggesting that the economy and prospects for better earnings growth are improving.  However, the dollar should be acting better and GLD worse under such a scenario; so, they represent cautionary signals.

In sum, the US numbers continue to portray the economy as sluggish.  However, the marked improvement in the economic stats in the last two weeks helps feed the notion that the US can avoid a recession---though I would by no means conclude that some kind of ‘lift off’ is occurring.  Much more is needed for that.
For the economic optimists---don’t worry about debt.  One question, what about all that mortgage debt in 2008 and what about that leverage in hedge funds today?
https://www.realclearmarkets.com/articles/2020/01/20/the_world_is_drowning_in_debt_because_its_drowning_in_production_104048.html

For the true Fed believers.
https://www.themoneyillusion.com/fed-policy-the-golden-age-begins/

But there is always that nagging problem of valuations.
https://www.zerohedge.com/markets/we-have-seen-one-bank-asks-how-long-investors-will-ignore-record-valuations-and-weak-eps

And the Fed. (must read)
https://www.zerohedge.com/markets/944-trillion-reasons-why-fed-quietly-bailing-out-hedge-funds

Bottom line: as long as investors buy into the notion that the Fed will forever have the Market’s back, stock prices are likely to go higher.  However, sooner or later, expansive monetary policy that only benefits equities versus the real economy will push valuations to such extremes that an ‘emperor’s new clothes’ moment seems inevitable.  May not happen for a year, two years.  But when it does, cash reserves will look awfully good.  Enjoy the ride; but consider taking some profits in your big winners.
https://www.zerohedge.com/markets/socgen-makes-striking-discovery-more-half-market-it-already-feels-recession

October UK payrolls grew faster than anticipated while November average earnings were up 3.2% versus forecasts of up 3.1%.

January EU economic sentiment came in at 26.7 versus consensus of 15.0.

The latest on the oil market.
https://www.bloomberg.com/news/articles/2020-01-19/crude-oil-jumps-on-libya-export-blockage-iraq-disruptions?sref=loFkkPMQ

The survival function of Roman emperors.
https://politicalcalculations.blogspot.com/2020/01/the-survival-function-of-roman-emperors.html#.XiXzrmhKg2w
The ethics of your financial affairs.
https://alephblog.com/2020/01/18/praise-for-the-moneyist/
The math of debt.
https://www.safalniveshak.com/math-of-debt/

Quote of the day.
https://cafehayek.com/2020/01/quotation-of-the-day-3044.html?utm_source=feedburner&utm_medium=email&utm_campaign=Feed%3A+CafeHayek+%28Cafe+Hayek%29