The Market
Technical
The S&P continues to perform well, no matter the latest trade headlines.  A lot of Market gurus keep saying that the resolution of the US/China trade dispute is critical to stock price momentum.  But this Market has been advancing on days of good trade news (usually a substantial move) and on days when the news is disappointing (either a minor decline, no price movement or a price increase).  So, it appears to me that the upward momentum remains.  But there are a couple of minor potential problems: (1) on the current very short term move, momentum is losing some strength, (2) the indices are in overbought territory, (3) the October 11th gap up opens still need to be closed. 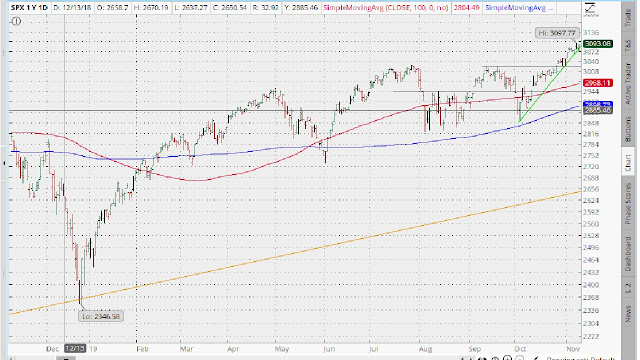 The long bond was down another ½% on Friday.  It has now firmly taken out the support offered by the 9/13 low; and its 100 DMA has reverted to resistance.  Importantly, it is on top of two other significant support levels: the lower boundary of its short term uptrend and its 200 DMA.  If it can hold those two levels, then the worst of the price performance for TLT would be over.  On the other hand, if it successfully challenges those trends, there is no visible support for another 20 points on the downside. 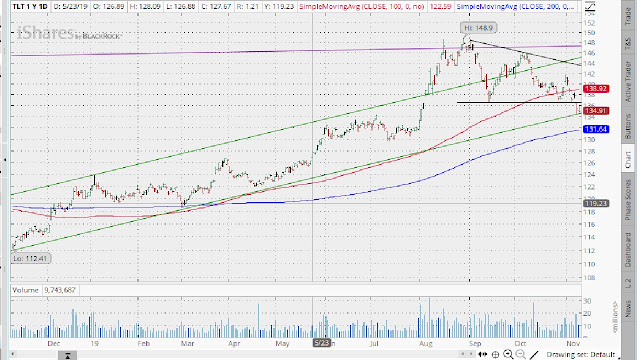 In the past week, the dollar challenged both its 100 DMA and the lower boundary of its short term uptrend, failed and rebounded sharply.  While it could always mount another challenge, the pin action suggests that probability diminishes every day. 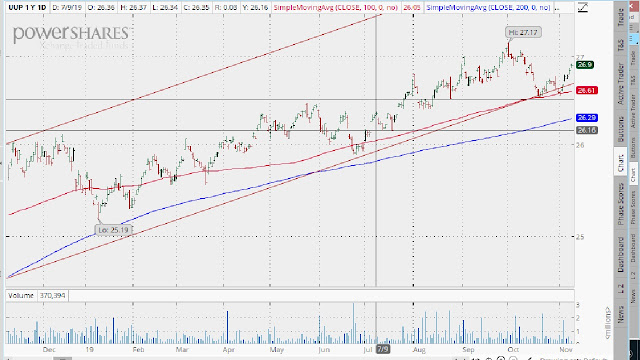 Gold continued its slide, ending below its 100 DMA for a second day (now support; if it remains there through the close today, it will revert to resistance).  On the other hand, it is still well above its 200 DMA and the lower boundary of its very short term uptrend; meaning that, on the one hand, it has plenty of room to find/build a consolidation level and then move back above its 100 DMA but, on the other hand, it could experience a good deal more downside before it encounters any support.

The dollar is confirming the stock market’s assessment that the economy is in for a big improvement.  TLT and GLD seem to be in the process of doing so; though to be clear, they have not yet done so. 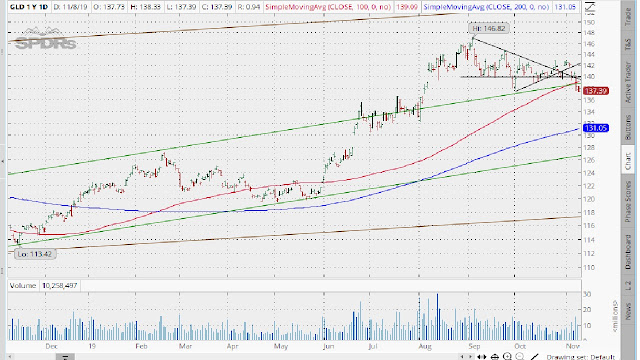 The VIX see sawed for most of last week, but then closed down firmly on Friday.  That left it very near to its 7/25 low and put it more in sync with breadth as an indicator that stocks are in overbought territory. 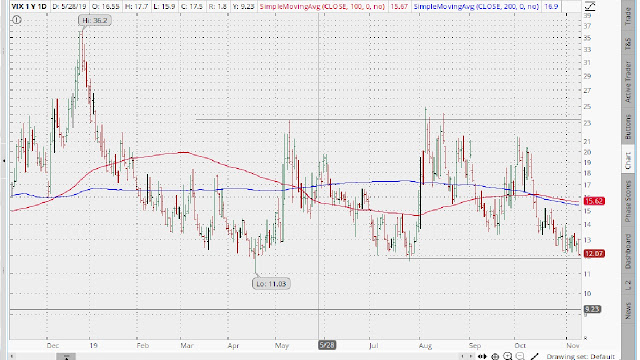 This is a great article by John Mauldin on our conflict with China and what we should do about it.
https://www.zerohedge.com/geopolitical/mauldin-how-china-plans-take-over-us

October Chinese CPI came in at +0.9% versus estimates of +0.7%; PPI was -1.6% versus -1.5%; auto sales fell 6%; loan growth was CY661.3 billion versus CY800 billion.
https://www.zerohedge.com/personal-finance/china-auto-sales-fall-6-october-global-auto-recession-shows-no-signs-slowing

All the brands that have apologized to China.
https://signal.supchina.com/all-the-international-brands-that-have-apologized-to-china/

The end of NATO.
https://www.zerohedge.com/geopolitical/end-nato