Here is even a longer term chart than I presented last week; but the point is the same.  The S&P is on a sizz.  The assumption has to be that the upward momentum will continue, though clearly it is nearing a powerful resistance at the upper boundary of its long term uptrend. 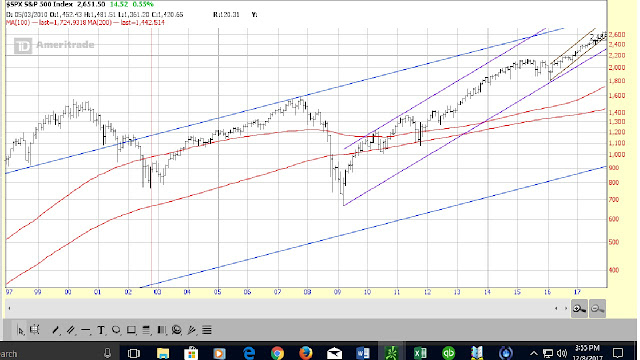 Despite some volatility, the long Treasury continues to move to the upside.  It remains above both moving averages and the lower boundaries of a very short term uptrend, a short term trading range and a long term uptrend.  In other words, the weak long term rates or safety trade is holding in the face of the FOMC meeting this week in which it is expected to raise rates.
http://www.zerohedge.com/news/2017-12-10/bank-america-weve-seen-movie-it-ends-recession 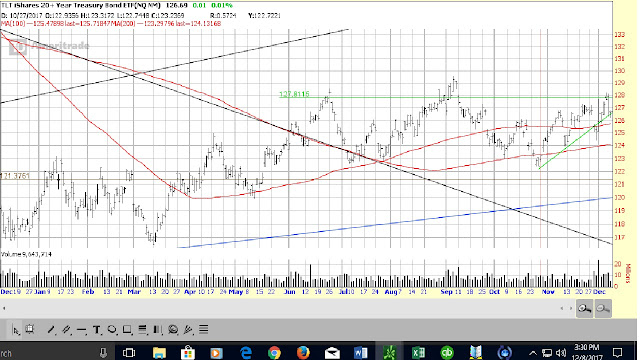 The dollar is now above its 100 day moving average and is on the cusp of challenging its short term downtrend.  If successful, it would point to a stronger economy/higher interest rates or a safety trade. 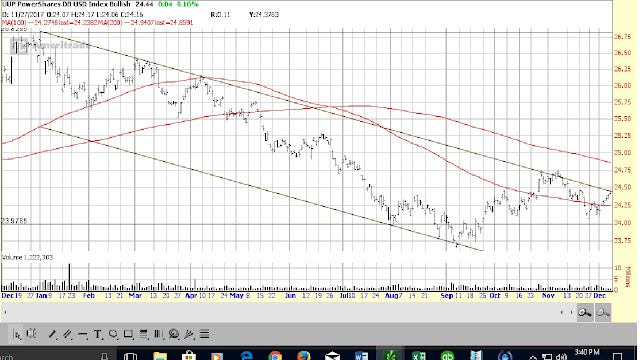 GLD had a punk week, resetting its short term uptrend to a trading range and reverting its 100 day moving average to resistance.  That tends to indicate higher interest rates and/or a retreat from a safety trade. 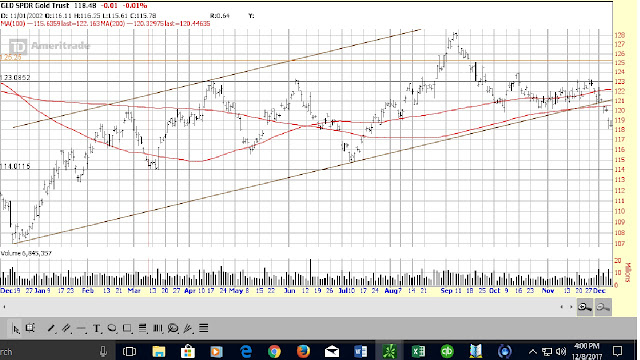 While equity prices rose last week, the VIX was pounded to greater extent than commensurate with the stock price advance.  Indeed, the VIX is closing in on another challenge of its July lows.  Something seems off. 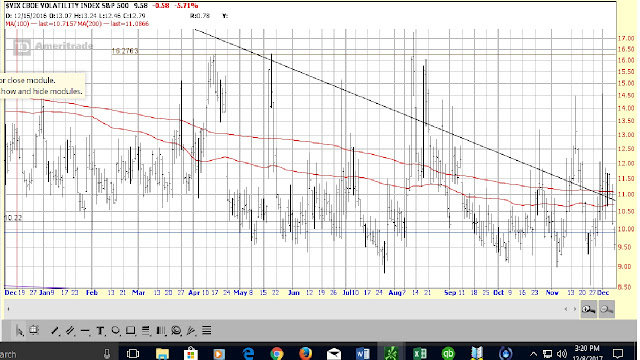 Bottom line: the disparate performance of the indicators keeps me very uneasy with the technical picture given the seeming inconsistency of the thinking/rationale of investors in various markets.

The data last week was pretty evenly matched; although the primary indicators were a solid plus.  The call is a plus.   Score: in the last 113 weeks, thirty-six were positive, fifty-six negative and twenty neutral.  However, as I noted last week, the recent trend has been upbeat which I attribute to the Trump regulatory agenda, the increasing growth in the EU economy and a rising level of consumer and business sentiment as congress continues to make progress on the tax bill.

Overseas, there was not many stats out of the EU while those from China were mixed and the Japanese continues its positive trend.  That really doesn’t change the global economic picture: EU a plus, China a negative, Japan attempting to demonstrate some consistent growth.

(1)   the senate passed its version of tax reform.  The GOP is now driving to the hoop for passage of a tax bill.  I suspect the odds are for success; though at the moment, the terms of the bill are still up for question as political process evolves.

Whatever the details, it still appears that

[a] corporations will get the lion’s share of tax reductions---which {i} I don’t believe is fair and {ii} they are receiving this largess on the thesis that they will spend the extra cash from tax savings on investment and creating jobs.   There is only one thing wrong with that notion---corporations already have a lot of free cash flow and have to date used it buyback stock and grow their dividends.  While they have every right to spend their money as they see fit, I fail to see how lowering their tax rate, thereby increasing their cash flow will alter their decision on how to spend cash.

[b] the legislation will still add $1.5 trillion to the national debt.  I have beat this horse to death; but the bottom line is that at the US current level of debt, adding another $1.5 trillion will be do more to hinder economic growth than increase it.

That said, the big unknown is the psychological effect a tax bill, however, flawed, will have on corporate investment decisions.  To be sure, we witnessed a brief surge in economic activity immediately following the Donald’s election, only to peter out with the realization that one man wasn’t going to change how business got done in DC.  Will this time be different?  Certainly, an initial spurt in economic activity is easy to imagine.  The question is, is it sustainable?  That is probably the biggest issue impacting the economy in 2018.

(2)   Congress managed to extent the spending authority of the government by another two weeks.  While that is not exactly a moment for jubilation, it does indicate that the GOP and dems can reach some kind of agreement in order to avoid a government shutdown.  True, the same problem will again come to a head shortly; but with all the negotiations occurring on multiple fronts, hopefully, our governing class can come up with a compromise that keeps the government open.

On the other hand, keeping the government in business at a negative run rate [deficit] at a time of unsustainable national debt isn’t exactly a victory to cheer about.

(3)   the Donald has already started talking about an infrastructure bill.  We have no idea what his proposal will contain, but here is what I am watching for: [a] how big will it be.  Early rumors have it a $200 billion; and that is relatively modest, [b]what projects will it entail?  More Obama ‘shovel ready’ imaginary spending or real ventures that improve America and produce jobs?

One other piece of overseas news worth mentioning: the EU and UK inched closer to agreement on Brexit.  This is good news and lessens any risks that would be associated with any economic disruptions that could result from a contentious breakup.
http://www.zerohedge.com/news/2017-12-08/uk-and-eu-reach-agreement-taking-brexit-talks-next-phase-irish-border-questions-ling

Bottom line: the economic data continues to improve; and I upgraded our 2018 growth forecast to reflect that.  To be sure, it wasn’t wildly optimistic but it did portray an economy emerging from a near year long bout with stagnation.  Further, it may be given an additional boost depending on the outcome of the tax bill and Trump’s infrastructure spending plans.  At the moment, I am not all that hopeful regarding the former and I simply don’t know enough to have any opinion of the latter.

That said, I think that the big unknown is not what the terms of the aforementioned legislation may be but how businesses and consumers react to it.  So far, everybody is jiggy.  However, the rubber has yet to meet the road.
http://www.zerohedge.com/news/2017-12-10/no-risk-recession

Earnings may not matter but dividends do (as in the present value of future cash flows):
http://blog.knowledgeleaderscapital.com/?p=13778

Investing for Survival
The death of equities, redux
http://awealthofcommonsense.com/2017/12/a-death-of-equities-redux/

Since bitcoin is now on everyone’s lips with few understanding it, I am going to start making regular entries of the subject.  Here is the original paper done by the developer of bitcoin.  Don’t worry, it is not that technical:
https://bitcoin.org/bitcoin.pdf